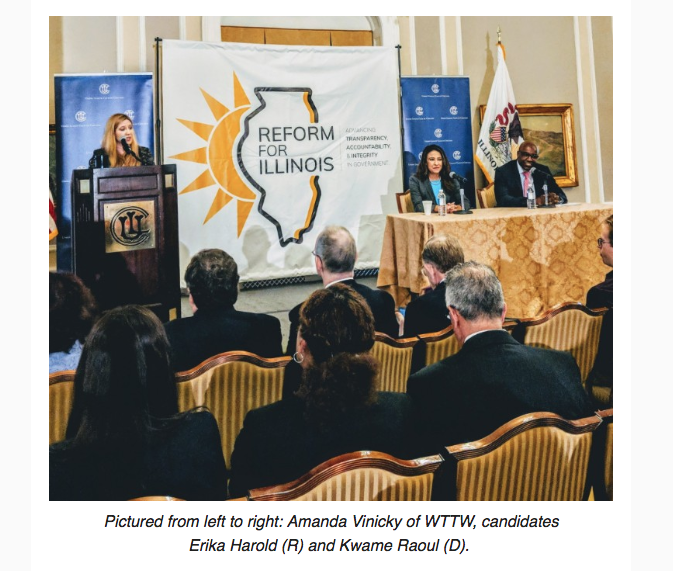 Illinois Attorney General hopefuls Erika Harold and Kwame Raoul both pledged in a recent debate to improve the office’s oversight of state transparency laws, but they also said they don’t plan to help expand the types of records those laws make public.

Harold, a Republican attorney from Urbana, and Raoul, a Democratic state senator from Chicago, fleshed out their positions on transparency and public corruption at a debate co-sponsored by Reform for Illinois at the Union League Club on Oct. 5. The two are vying to replace four-term incumbent Lisa Madigan, a Democrat who declined to seek re-election. WTTW’s Amanda Vinickymoderated the debate.

A ProPublica investigation published a few days after the debate detailed shortcomings with the Attorney General’s Public Access Counselor office, which acts as a backstop for the public when government agencies deny access to records or meetings under the Freedom of Information Act or the Open Meetings Act. The report said the counselor’s office was “overwhelmed and inconsistent” with more than 28,000 public appeals swamping the office over the last eight years. Hundreds of appeals dragged on for more than four years.

Harold and Raoul agreed during the debate that the office has been stymied by too many appeals and too few resources.

“Incrementally the number of claims… have increased year after year to where the public access counselor’s office is way overburdened,” Raoul said, adding that creates an “obligation to shift resources or to invest resources” to address the problem.

Harold said the counselor is “one of the most powerful parts of the office” and should issue more “binding opinions” to better guide local governments on how to respond to records requests or properly hold public meetings.

Meanwhile, both candidates said they had no plans to support expanding the public’s access to government records by eliminating exemptions in the state’s transparency laws. In particular, Harold said she wouldn’t consider it until the office’s backlog of appeals was handled.

The candidates were also asked about making court hearings and records more accessible to the public by putting such records online and ensuring hearings can be videotaped by the media or public.

Raoul said he believes “more and more documents generally should be accessible to the public,” but he added there are some court records, such as juvenile cases, that should not be online. Harold said she would support posting all judicial opinions online, but not underlying records because of privacy concerns.

Harold said she would support rules to open up more courtrooms to videotaping, with privacy protections. Raoul appeared less committal, saying such a move should be examined on a “case-by-case basis.”

“I think it is valuable to have the transparency of cameras in the courtroom so people can evaluate how their justice system is operating,” Raoul said, while adding: “I think it is a double edged sword to be honest with you, because I think, as we have seen in some televised trials, the trials are conducted in a certain manner because of the publicity of the trial rather than conducted in accordance with the law.”

The two candidates were pressed on how they would stay independent from their respective political parties and campaign funders while tackling public corruption.

Both candidates roundly pledged to keep politics out of office decisions. Raoul said he would ensure that, in part, by hiring individuals who “have a had background of following the law and not following politics.” Harold said she would bring in outside ethics trainers to “bring a fresh approach” to the office. 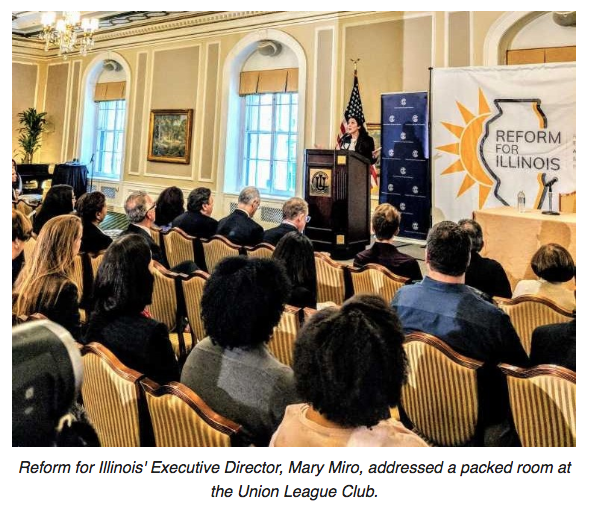 The two appeared to disagree about whether the office should have the same power as local prosecutors to convene grand juries. Harold said she supports legislation to do so because it “would enable the attorney general to look more systematically and comprehensively at issues of public corruption.”

Raoul, however, didn’t directly embrace the idea, and said Lisa Madigan has had a record of tackling corruption without the power to convene grand juries.

“There are a long list of cases where she has prosecuted both Democratic and Republican public officials utilizing the existing grand jury authority at the local level in cooperation with local state’s attorneys,” he said.

On voter rights, the candidates were asked to weigh in on the state’s participation in the controversial Interstate Voter Registration Crosscheck Program. The program is billed as a way to prevent voter fraud by identifying individuals who are registered to vote at the same time in multiple states. But the program has been criticized as inaccurate, unfairly putting voters — particularly minority voters — at risk of losing their legitimate registration status.

Gov. Bruce Rauner vetoed legislation from Raoul to stop Illinois from participating in Crosscheck. Harold said the state should stay in the program to protect against voter fraud.

“The purpose of those programs are to make sure that you are able to know who should be voting within your state,” Harold said.

Want to learn more? Watch the whole debate on CAN TV to hear the candidates discuss topics from Brett Kavanaugh to same sex marriage.