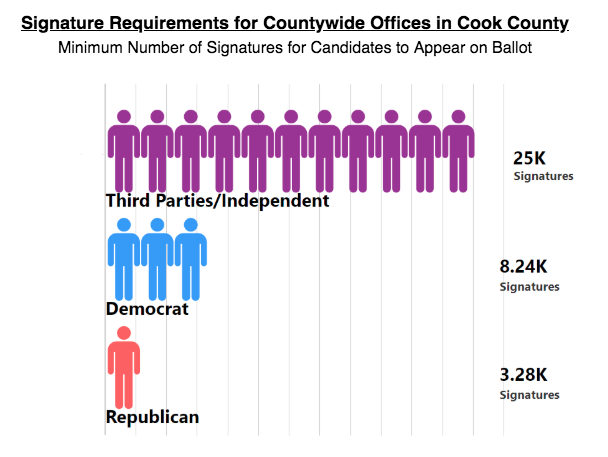 Getting on the Illinois Ballot: How many Signatures does it Take?

Candidates consider several factors while campaigning for public office, but sometimes, just getting on the ballot is their greatest challenge.

In order to run for an elected office, candidates are required to collect a certain number of petition signatures for their nomination. The number of signatures varies among positions, parties, and counties across the state.

Some advocates think having a minimum requirement for ballot access demonstrates the seriousness of a candidate’s chance of winning. The threshold enables election officials to “control the clutter,” said Mayram Judar, executive director of the Citizen Advocacy Center.

However, signature requirements can be daunting for candidates. Candidates for Chicago mayor must gather 12,500 signatures to get on the ballot, which is 250% more than the 5,000 necessary signatures to run for governor. This makes it inevitably more difficult for grassroots candidates to challenge an incumbent such as Mayor Rahm Emanuel.

These requirements can discourage or act as a barrier for qualified candidates from running or getting on the ballot. Republican State Sen. William Sam McCann is running for governor under the new Conservative Party. Even though McCann has served in state government since 2011, he needs 25,000 signatures to get on the ballot. That’s five times more than what Gov. Bruce Rauner needed when he first ran for office in 2014.

However, Ken Menzel, general counsel of the Illinois State Board of Elections, said in an email that comparing those numbers is like comparing apples and oranges because the Democratic and Republican parties have already established wide voter support as opposed to independents and new parties. Independent and new party candidates are not subject to rigorous primaries and go straight to the general election; therefore, they’re required to get more signatures, he added.

“To borrow a sports metaphor, the 5,000-signature requirement for established party statewide candidates gets one into the playoffs, where one needs to win to play for the championship,” Menzel stated in the email. “The 25,000-signature requirement for new party (or independent) statewide candidates gets one directly into championship game.”

But Jundar argued that the inconsistency among ballot signature requirements creates an uneven playing field. “Why should a Green Party, Libertarian Party, or Constitution Party candidate have to collect a multiple number of signatures as compared to Democrats and Republicans,” she said. “Democracy would be better off if there were more parties (and voices) at the debate table.”

Compared to some other states, Illinois is dramatically different. In New York statewide elections, the same number of petition signatures, 15,000, are required for Democrats, Republicans, and Independents candidates, according to the New York State Board of Elections.

Once candidates in Illinois collect their required signatures, they often face additional legal challenges to remain on the ballot. Some candidates file claims contesting the validity of their opponents’ signatures. This may lead the circuit courts to rule against the contested candidates and remove them from the ballot.

The signature requirements for Illinois state offices were determined by the General Assembly, which comprises of Democrats and Republicans. While it’s reasonable to build guidelines to ensure the ballot isn’t overcrowded with unqualified candidates, should Illinois voters ask its representatives to close the gap of signature requirements between the two major parties, independents, and new parties? Could closing the gap level the playing field for grassroots candidates to run for both county and statewide office? 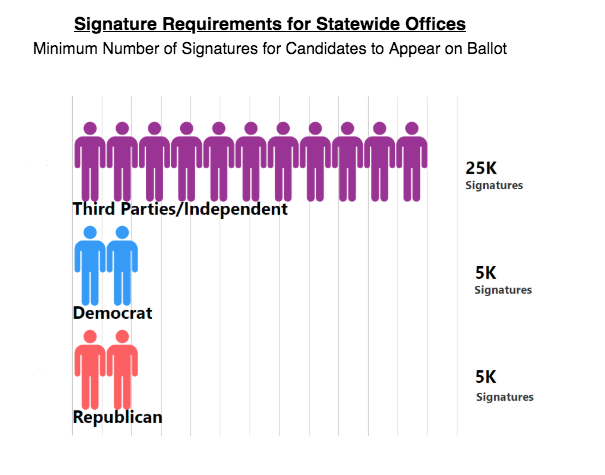 © 2020 Reform for Illinois
Reform for Illinois is a research and advocacy organization that empowers the public to participate in government, addresses the role of money in politics, and promotes integrity, accountability, and transparency in our political system.