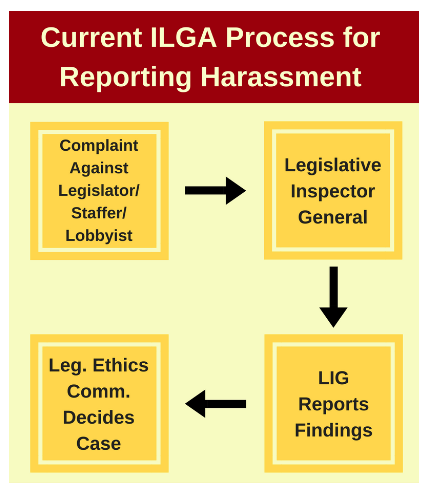 #MeToo in Illinois: Progress Made in Sexual Harassment Investigations, but Still Room for Improvements

The #MeToo movement engulfed Springfield in November 2017 after an activist announced that no investigation was conducted after she submitted a sexual harassment complaint about a powerful state senator. ICPR reported this inaction as result of the Legislative Ethics Commission (LEC) and legislative leaders’ failure to fill the office of the Legislative Inspector General (LIG).

Amid the controversy, legislators moved quickly to appoint attorney Julie Porter as an interim LIG. She began investigating a backlog of complaints that accumulated over the two years without an LIG.

Legislators passed a handful of preliminary reforms to address flaws in the legislative ethics investigation process. Senate Bill 402, which was signed into law in November 2017, amended the legislative ethics code to include sexual harassment as an ethics violation. Other bills waived the deadline for backlogged complaints and a House and Senate Sexual Harassment Task Forces was created to address sexual harassment in Springfield.

To compound the controversy, the Democratic Party of Illinois faced a sexual harassment scandal of its own when a campaign staffer accused Party Chair and House Speaker Michael Madigan of covering up sexual harassment by one of his top aides. In response, Madigan formed an independent Anti-Harassment, Equality, and Access panel in February 2018, which consists of Comptroller Susana Mendoza, State Rep. Carol Ammons (D-Champaign), and State Sen. Melinda Bush (D-Grayslake). Since its formation, the panel has provided no update regarding the creation of new reporting policies or how to adjudicate and take disciplinary measures in response to sexual harassment. The panel plans to meet over the summer to continue this work.

Across the aisle, the Illinois Republican Party provided no response when ICPR requested details on the party’s protections for campaign workers experiencing sexual harassment.

Emma LaBounty, a member of the Executive Council of the Campaign Workers Guild who lives in Chicago, explained that numerous campaign workers unionize to gain protections without changes in state statute. Campaigns “recognize that [sexual harassment and assault] is an issue that needs to be dealt with,” she said. LaBounty added that accountability measures must be included in collective bargaining agreements.

The issues within the Democratic Party prompted campaign workers and volunteers in Illinois to call for greater protections. State Rep. Sara Wojicicki Jimenez (R-Springfield), the Republican Spokesperson for the House Sexual Harassment Task Force, said its members plan to expand the Illinois Human Rights Act to include campaign workers and volunteers in those protected by the act’s anti-discrimination measures. 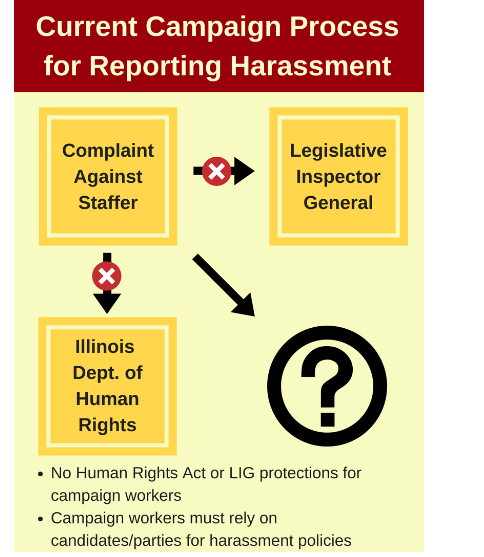