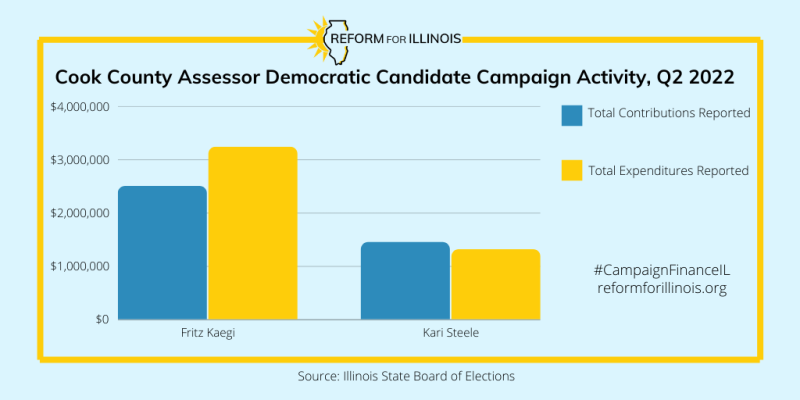 Fritz Kaegi took in $2.5 million this quarter, a sum that includes $2 million in self-loans and two $100K donations from Chairman of Newsweb Corporation Fred Eychaner and Chairman of Morningstar Inc. Joe Mansueto. He spent about $3.2 million, a significant jump from his $263K in expenditures last quarter. Kaegi allocated a whopping $2.1 million towards media spending.

Kari Steele took in $1.4 million this quarter, including a $100K self-loan. About 69% of her total contributions came from the Fight Back Fund, a labor organization linked to the real estate industry that transferred $1 million to Steele in early May; much of the rest came from others in the real estate business. She spent about $1.3 million, also a significant jump from her $109K in expenditures last quarter. Slightly more than $1 million of these funds went toward media spending. Steele had about $240K in funds available at the close of the second quarter.

Kaegi ultimately beat Steele by about 7%, and he will face Libertarian candidate Nico Tsatsoulis in the general election. Kaegi currently has $140K cash on hand. To date, Tsatsoulis has not yet reached the $5K threshold to report his campaign finances to the Illinois State Board of Elections.

Most Cook County voters are likely familiar with current Cook County Board President Toni Preckwinkle or the ill-fated sweetened beverage tax of 2017. The Board of Commissioners, though, gets less attention. The Board legislates at a county level –– including Chicago –– on a myriad of issues, including property taxes, land use, and the health and safety of Cook County residents.

Given many voters’ lack of familiarity with the Board and its work, it comes as no surprise that elections for the Cook County Board of Commissioners are often a foregone conclusion. Less than half this year’s races will feature more than one candidate, and only a handful have proven financially competitive. Self-funders dominate these races: of the 22 candidates with any money raised thus far that faced or will face challengers, 11 are their own top contributor and 3 are their second top contributor. With contributions from individual donors making up a small fraction of overall contributions across all candidates, fundraising trends also point towards the limited visibility of the Board’s elections.

We examined three primaries –– those in Districts 5, 8, and 17 –– that are an exception to the typical, noncompetitive mold of Cook County Commissioner races. To see which candidates ran or will run in your district this cycle, check out our 2022 Cook County Races page on Illinois Sunshine. You can find your district number using this website.

The Democratic primary in the 5th District, which includes portions of Chicago and the Bloom, Bremen, Calumet, Rich, Thornton, and Worth townships, was one of the Board’s most competitive races. Incumbent Commissioner Deborah Sims, who assumed office in 1994, announced her plans to retire last October. Four Democratic candidates who raised a combined total of nearly $974K competed for her seat: Vernard Alsberry Jr., current mayor of the Village of Hazel Crest since 2013; Monica Gordon, the current Director of Government Affairs and Community Relations at Chicago State University; Jaylin McClinton, recent law school graduate and Obama Foundation Community Organizer (also a former Reform for Illinois Board member); and Kierra Williams, former elected School Board Member and current law student.

Throughout the race, Alsberry maintained a strong lead in terms of contributions and expenditures. This quarter, he took in a total of $107K, almost $66K more than he did last quarter. His top contributions included $27K in self-loans, a total of $10K in donations from Catalyst Consulting Group LLC, and a $5K transfer from 19th District State Sen. Michael Hastings. Alsberry spent just under $184K, allocating about $86K toward consulting and transferring $29K to the Citizens to Abolish Red Light Cameras, a committee that he is the only donor to.

While Gordon was $1.5K behind Alsberry in fundraising last quarter, she took a substantial lead this time around. She raised almost $216K, including a total of $55K in transfers from Chicago Heights Mayor David Gonzalez, $44K from the SEIU Council PAC Fund, and a $34.9K transfer from S.E.I.U. Local 73. As for expenditures, Gordon spent $226K, allocating about $118K towards printing.

The other two contenders lagged behind Alsberry and Gordon in terms of both contributions and expenditures. McClinton took in $55K this quarter; his top contributions included $6K in transfers from Illinois House Majority Leader Greg Harris and a $5K donation from Karla Jurveston, one of the Democratic Party’s top national contributors. He also received 74 itemized individual contributions, more than any other candidate in the race. Williams spent $2K and took in just $2.6K.

The results of this race ultimately did not align fully with what fundraising trends projected. Gordon won the nomination with 38.21% of the vote, followed by Alsberry with 23.68%, Kierra Williams with 23.34%, and McClinton with 14.76%. She will go on to face Libertarian candidate Jason Decker in the general election.

Arroyo Jr. and Quezada dominated the money race. This quarter, Arroyo Jr. took in $36K, including a $10K transfer from Preckwinkle for President. Arroyo Jr.’s top overall contributor –– to the tune of $65K –– is the Arroyo Open PAC, a group that supported him and his father, ex-State Rep. Luis Arroyo Sr., in the years preceding Arroyo Sr.’s 2019 indictment (and recent conviction) for bribery. From April to June, Arroyo Jr. spent $71K, $26K of which he personally received for the purpose of “campaign staff.”

Quezada, on the other hand, took in $99K this quarter. He had more itemized individual contributions than any other candidate in the race and about 19% of his funding came from small donors. His top contributions included a $15K transfer from United Neighbors of the 35th Ward, and a $7.5K transfer from Grassroots Illinois Action. As for expenditures, he spent $110K, with over $40K going towards printing.

Backed by an army of small donors and progressive groups, Quezada ultimately ousted Arroyo Jr. from his seat by nearly 16 points. His win signals a progressive shift in the Chicago district, and is a blow to Board President Toni Preckwinkle, who is Arroyo Jr.’s third top donor overall.

With over $1.1 million raised overall, the Republican primary for District 17, which comprises 10 suburban townships and O’Hare International Airport, was the Board’s most competitive. Incumbent Commissioner Sean Morrison, Chair of the Cook County Republican Party, faced a primary challenge from the district’s former commissioner, Elizabeth Gorman. Gorman, who held the seat from 2002-2015, left office to work in the private sector for the years before becoming the Executive Director of the Illinois State Toll Highway Authority under Governor Bruce Rauner. After resigning from her post following Governor Pritzker’s 2019 inauguration, Gorman set out to reclaim her old Commissioner seat.

This quarter, Morrison took in $114K, up $84K from last quarter. His top contributions included $40K in transfers from Build R Future, a PAC supporting Republican candidates in Illinois; a $15K transfer from Richard Irvin’s mayoral campaign; and $5K in transfers from the Realtor Political Action Committee. Morrison spent a total of $184K, largely on campaign literature.

Gorman took in $129K this quarter, down significantly from the $264K she brought in from January to March. The first quarter sum includes a contribution cap-lifting $100K self-loan and a $100K donation from founder of Accretive Health and frequent Illinois Republican donor Mary Tolan. From April to June, Gorman’s top contributor was herself, after loaning another $96K to her campaign. Gorman spent $395K this quarter, a sum that includes $110K in repaid loans to herself and over $178K spent on mailings.

Despite the pair’s massive spending gap, Morrison ultimately held onto the seat with a 14 point lead over Gorman. He will go on to face former Cook County State Attorney Daniel Caladriello in the general election.

Lightfoot steps up fundraising but lags badly behind her predecessor; six new candidates enter the race 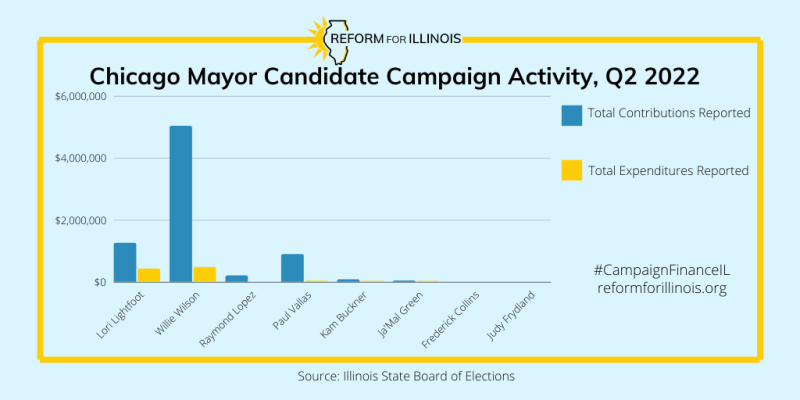 After several recent entries in the race, Mayor Lori Lightfoot is fighting to hold on to her highly contested seat, and her finances for the quarter reflect this. With $1.2 million in fundraising, Lightfoot is bolstering her war chest. Her largest individual contributor this quarter was Fred Eychaner, chairman of Newsweb Corporation and a major Democratic donor, who donated $100K to Lightfoot’s campaign. Lightfoot also received significant backing from various labor groups, including a $100K contribution from the Carpentry Advancement Political Action Committee Fund. Throughout the quarter, Lightfoot spent $426K, with her most significant expenses being campaign consulting and research. The Lightfoot campaign is currently sitting on nearly $2.5 million in available funds. For comparison, former Mayor Rahm Emanuel had more than $8.3 million in available funds after the second quarter of 2014. Emanuel was a master fundraiser, but Lightfoot may still need significantly more cash to mount a successful reelection campaign.

Lightfoot’s best-funded adversary is Willie Wilson, who added over $5 million to his coffers this quarter and is currently sitting on $4.5 million in available funds. However, Wilson has raised very little from outside contributions; almost all of his fundraising has come from that $5 million self-loan. The Wilson camp has spent $480K during the last quarter. Alderman Raymond Lopez is also competing for the seat, having raised $192K and spent just $8K this quarter. Lopez currently has $211K cash on hand.

The mayoral race has grown considerably since our last report, with six new candidates entering the race. Paul Vallas, who announced his candidacy for mayor earlier in the quarter, has raised $886K. One $500K donation from Michael Keiser, and two $100K donations from John Canning and James Perry, Jr. account for almost 80% of Vallas’ fundraising this quarter. Vallas spent just under $36K this quarter and has $860K in campaign cash available for the third quarter of 2022. Current State Rep. Kam Buckner is leading the field in small-donor donations, with 21% of his $73K raised coming from contributions of less than $150. Buckner, who announced his bid for mayor in May, spent almost $25K throughout the quarter and currently has $53K available to spend.

We can expect increasingly large fundraising hauls in this race as February 2023 draws closer. In the meantime, we’ll continue to update you on the latest with this ever-growing field of candidates.