The battle between billionaires Ken Griffin and Dick Uihlein continued into the second quarter of 2022, with Uihlein’s choice Darren Bailey ultimately winning the Republican nomination with a healthy 57.7% of the vote. Billionaire-backed upstart candidate Jesse Sullivan placed second with 15.6% of the vote, followed by Griffin’s favored candidate, Richard Irvin, with 14.9%. Bailey will go on to face incumbent Governor JB Pritzker in the general election this November. 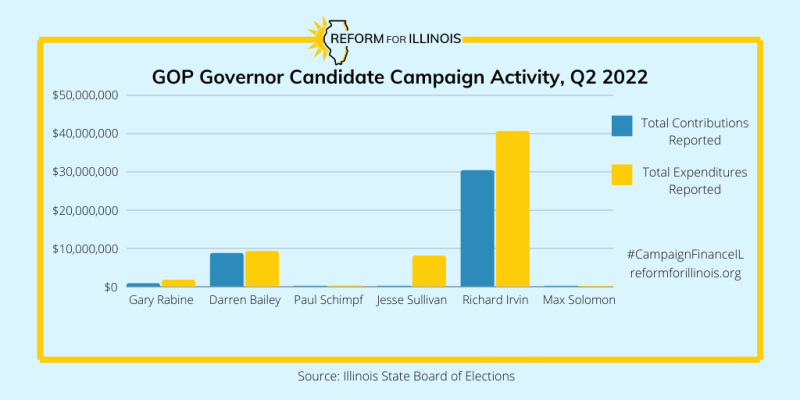 Darren Bailey raised $8.6 million this quarter, $8 million of which (or 92%) came from billionaire shipping supplies magnate Dick Uihlein. Uihlein’s support jumped significantly from last quarter, when he gave Bailey just $1 million. Bailey’s largest expenditures this quarter were for media buys, totaling over $6.6 million. The Bailey campaign is currently sitting on $379K in its campaign account, but we can expect the floodgates to open now that Bailey is officially the Republican nominee.

Bailey and Uihlein got an unexpected boost from Gov. Pritzker. The billionaire governor gave $24 million to the Democratic Governors Association (DGA) this quarter, according to reports filed with the IRS, representing almost half of the DGA’s $52 million fundraising haul. The DGA spent more than $15 million on ads attacking Richard Irvin (and promoting Darren Bailey) before the primary. It’s part of a larger strategy by Democrats nationwide to boost far-right Republican candidates –– under the assumption that they’ll be easier to beat in a general election.

Richard Irvin raised $30.3 million this quarter, with $30 million coming from billionaire hedge fund tycoon and GOP megadonor Ken Griffin. Griffin’s spending in the gubernatorial race also increased this quarter, up from the $20 million he contributed to Irvin’s campaign last quarter. Griffin donated more than $50 million to Irvin over the course of the primary (accounting for 95% of his total fundraising), which is “the largest amount ever given by a single donor to a U.S. candidate at any level,” except for wealthy politicians who bankroll their own campaigns. Irvin outspent all other candidates this quarter across both primaries; his expenditures totaled $40.5 million. Irvin spent big on PR and media, sending $7.6 million to Storytellers Group LLC and $24.3 million to Strategic Media Services Inc. Griffin’s poor return on investment in the gubernatorial and other races (his candidates also lost in the Attorney General and Secretary of State primaries) coincided with his announcement that he and his family will relocate to Florida. It is unclear whether he will continue to be active in Illinois politics, or if he plans to financially support Darren Bailey’s campaign in the general election.

Last quarter we covered Dick Uihlein’s $1 million donation to Dan Proft’s newly-created People Who Play By The Rules PAC. We reported then that People Who Play The Rules had not yet spent any of that sum –– but that changed dramatically this quarter. The People Who Play By The Rules super PAC spent over $7.1 million this quarter on independent expenditures opposing Richard Irvin’s campaign for governor. Dick Uihlein is still the super PAC’s largest (and only reported) donor, having contributed an additional $7 million this quarter. Uihlein transferred $5 million to the PAC on July 6th and another $15 million on July 26th, signaling that we can expect more spending from this super PAC ahead of the general election.

Other Republican candidates were not entirely left out; they still threw considerable money around before the primary. Runner-up Jesse Sullivan, who was backed by Silicon Valley billionaires, raised slightly less than $220K and spent $8 million throughout the quarter. Donations of $150 or less accounted for just under 19% of his fundraising haul this quarter, making him the leader in small-dollar donations. Gary Rabine collected over $859K, with $400K coming from loans he made to his own campaign. Rabine spent $1.7 million, with over $430K going to digital consulting services. Finally, Paul Schimpf raised $129K, and Max Solomon raised $13K.

Incumbent Gov. JB Pritzker had a slower quarter, raising just $353K after donating $90 million to his campaign last quarter. Pritzker received an additional $1.1 million in campaign mailings from the Democratic Party of Illinois, after he transferred $1.5 million into DPI’s coffers this quarter. Pritzker’s $27 million in expenditures this quarter are a $10 million increase from the first quarter of 2022. The governor’s main expense was media, with about $16.3 million going to media buys and production. The Pritzker campaign is currently sitting on a massive war chest of $60.8 million, and his spending will likely increase even further as he looks to thwart Republican nominee Darren Bailey.

Despite a 4-3 majority on the Illinois Supreme Court, Illinois Democrats are increasingly concerned about the two supreme court seats up for election this year. 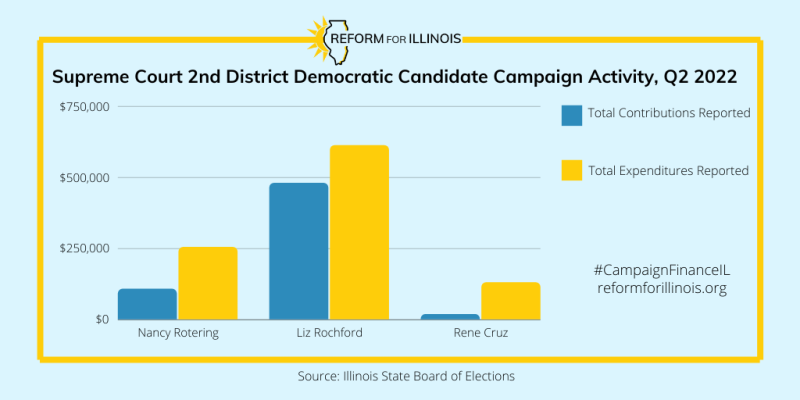 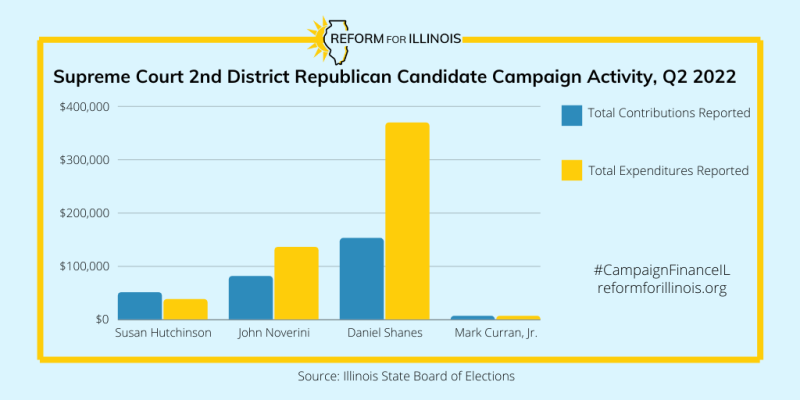 In the GOP primary for the 2nd District seat, Mark Curran won over Judge Daniel Shanes and Judge John Noverini despite spending very little money, raising the question of whether Griffin’s spending restraint cost Shanes the race. Curran’s victory will cause contribution caps to snap back in place for the 2nd District race, since Judge Shanes and Judge Noverini are the only two self-funders.

Winner Mark Curran reported the smallest fundraising haul among the GOP contenders for the 2nd District seat. Curran received a total of $5.8K in contributions this quarter, with about 16% coming from donations of $150 or less. With Curran ultimately declared the winner of this primary, we can expect far more money to hit his campaign account in the third quarter.

In the 3rd District race, Justice Michael J. Burke (R) and Justice Mary Kay O’Brien (D) were both uncontested in their primaries and will advance to the general election.

Justice Burke took in $106K this quarter, nearly 5 times more than he earned in the first quarter. Of this, $20K was a transfer from the Illinois Chamber PAC and $20K was a self-loan. Burke spent more heavily this quarter, totaling $21K, largely on promotional items and media consulting. Burke currently has $302K cash on hand currently.

Justice O’Brien saw $269K in contributions this quarter, a significant increase from her first quarter total of $90K. She received an influx of campaign cash from union and education PACs, including $59.9K from the Illinois PAC for Education (I.P.A.C.E.), $57.4K from LiUNA Chicago Laborers’ District Council PAC, and $50K from the Illinois Pipe Trades Association. Despite raising more this quarter, O’Brien spent a conservative $28K, compared to $42K last quarter. She has $373K in available funds as the general election begins.

Contribution caps are back on in the race for Secretary of State, meaning that winners Alexi Giannoulias and Dan Brady are –– at least for now –– subject to contribution limits.

Republican candidate John Milhiser was the original self-funder in this race; his caps were blown by Citizens for Judicial Fairness back in May, which spent over $255K on radio and television advertisements supporting his campaign. Since Milhiser did not advance past the primary, contribution caps are back in place for the general election.  It remains to be seen whether Giannoulias or Brady intend to self-fund before the general election. 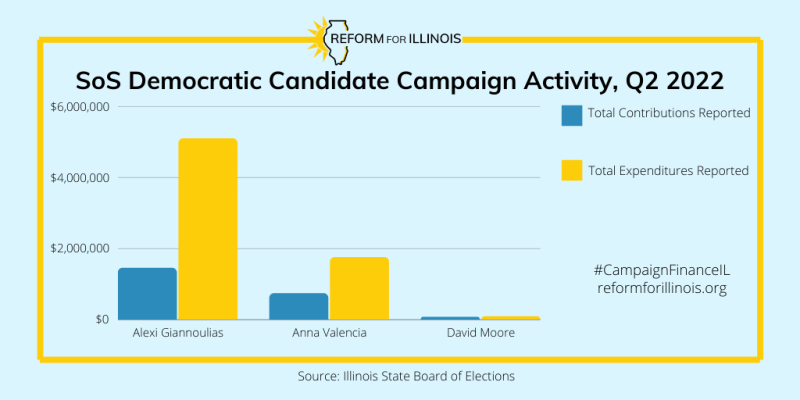 On the Democratic side, Alexi Giannoulias won the party’s nomination over the Pritzker-backed Anna Valencia. Giannoulias continued to bring heavy-hitting numbers to the SoS race this quarter, raising $1.4 million compared to $607K last quarter. He received multiple transfers from union PACs, including a $250K transfer from SEIU Illinois Council PAC Fund and $90K from Laborers’ Political League Great Lakes Region. Giannoulias greatly increased his expenditures this quarter, spending a whopping $5 million compared to $230K last quarter. His largest expenditures were for media, with $4.4 million paid to media firm Adelstein & Associates. For context, this payout alone was roughly equivalent to Giannoulias’ cash on hand last quarter. All that spending leaves Giannoulias with $785K in the bank.

Democratic runner-up and Chicago City Clerk Anna Valencia also saw a monetarily successful second quarter, raising $738K compared to $463K in the first quarter. Notably, Pritzker’s campaign committee transferred $55K to Valencia, and she received an additional $110K from the Illinois PAC for Education (I.P.A.C.E.). Valencia spent heavily on television ads from Left Hook Strategy this quarter, which accounted for $1 million of her $1.7 million total reported expenditures. Left with just $109K in her campaign account, Valencia cemented herself as the other big spender in the primary election.

Alderman David Moore continued to lag in the overall money race, but his fundraising did increase significantly this quarter. Moore nearly doubled his contributions, from $39K last quarter to $70K this quarter. Moore, like his Democratic peers, spent heavily: just shy of $85K total, with significant portions going towards consulting. 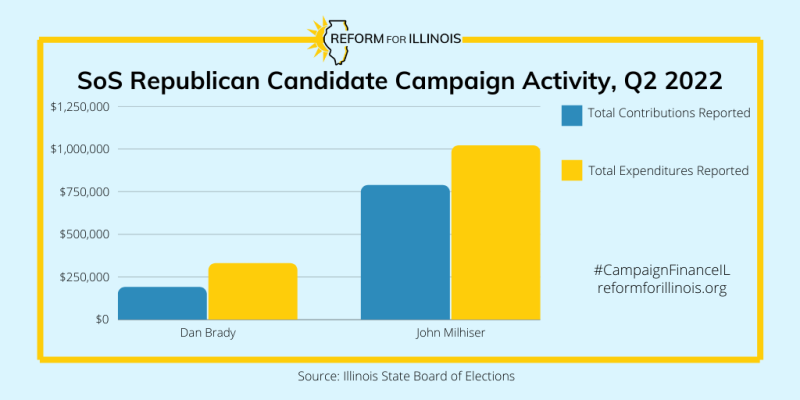 Primary winner Dan Brady won his party’s nomination despite John Milhiser’s sizable fundraising lead in both quarters of 2022. Brady received $190K in contributions this quarter, more than doubling his first quarter contributions. His largest contributor was the Illinois PAC for Education (I.P.A.C.E.), which transferred $109.9K to his campaign. Brady had $103K in the bank after $329K in expenditures at the close of the second quarter, largely for advertising (over $142K) and media (over $65K).

John Milhiser poured significant money into the GOP race for Secretary of State –– most of it from Richard Irvin’s campaign account, which was primarily funded by Ken Griffin. Of the almost $788K Milhiser received this quarter, $750K (or 95%) came from Irvin’s campaign committee. Milhiser logged $1 million in expenditures between April and June, the majority of which went towards media and consulting. Milhiser also transferred $100K back to the Sangamon County Republican Central Committee this quarter, after receiving a $100K transfer from the same committee in the first quarter of 2022.

Illinoisans will also vote on a so-called “Workers’ Rights Amendment” this fall, which would, if approved, enshrine the right to collective bargaining in our state constitution. Amendment 1, formally known as the Illinois Right to Collective Bargaining Amendment, would establish the fundamental right for workers to unionize; expand the ability of workers to negotiate wages, hours, and working conditions; and prevent future legislation that would make Illinois a “right-to-work” state. Three other states –– Hawaii, New York, and Missouri –– provide a right to collective bargaining in their respective state constitutions, but Illinois would be unique in including language preempting right-to-work laws in its constitutional amendment.

Right-to-work laws prohibit collective bargaining agreements that require union membership as a condition of employment, and these laws currently exist in twenty-seven states across the country. Proponents of Amendment 1 in Illinois argue that right-to-work laws significantly reduce the collective bargaining and political power of unions, thus harming working conditions and wages. Opponents of Amendment 1 argue that the wording of the amendment is too vague and that it contradicts preexisting federal law, as per the National Labor Relations Act.

The amendment is supported by various labor organizations such as the Illinois AFL-CIO and the Chicago Teachers Union. Significant financial backing for Amendment 1 is coming from the Vote Yes for Workers Rights ballot initiative committee. The committee raised $6.4 million this quarter, receiving contributions of $1 million from the International Union of Operating Engineers, LiUNA Chicago Laborers’ District Council PAC, and the pro-labor Fight Back Fund. The committee logged $4.4 million in expenditures; the vast majority was spent on media, with just shy of $4 million going to media firm Adelstein & Associates LLC. After a busy quarter, Vote Yes for Workers Rights currently has nearly $3.5 million cash on hand. Organizations opposing Amendment 1 include the Illinois Chamber of Commerce, the National Federation of Independent Businesses, and the Illinois Manufacturers’ Association (IMA).

Illinois voters will ultimately have the final say on Amendment 1 this November, and we can expect significant spending by Amendment 1’s supporters and opponents in the meantime. If the massive spending in the battle over the failed Fair Tax Amendment in 2020 is any indication, we’re in for a wild ride this year too.