Yesterday was the deadline for Illinois political committees to submit their quarterly reports detailing campaign contributions and expenses. They give us a picture of where the party committees, legislative leaders, and candidates in contested races stand with just under a year until the 2022 primary. 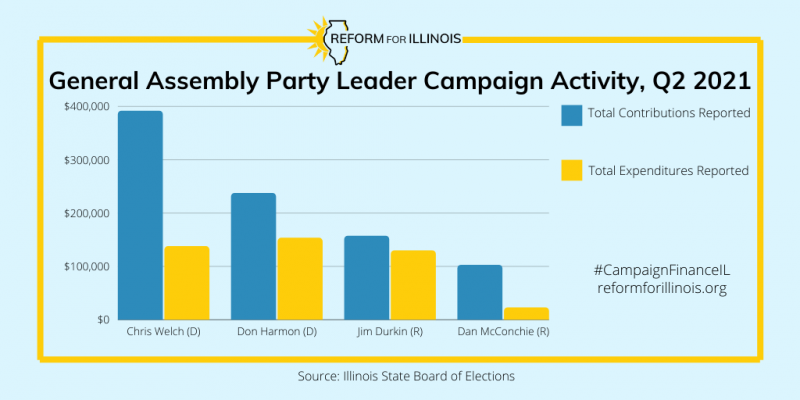 Chris Welch is making a strong showing in his first term as House Speaker, raising just shy of $400,000. Much of it has come from maxed-out contributions from union and corporate PACs that used to send money to Mike Madigan.

In the opposite chamber, Senate President Don Harmon brought in more than $200,000. Back in February, Harmon loaned his campaign $100,001 in order to trigger the self-funding provision in Illinois campaign finance law, so he (and any hypothetical opponents who may enter his district’s race) are no longer subject to contribution limits. That means he may report some much bigger donations as campaign season starts up.

Unsurprisingly, Welch and Harmon both outraised their Republican counterparts, Jim Durkin and Dan McConchie, both of whom brought in more than $100,000.

One legislative leader who shouldn’t be forgotten is former House Speaker Mike Madigan. Despite resigning in February, Madigan is maintaining his personal campaign committee. It reported very little activity this quarter but is still holding on to more than $10 million. With that much money in his control, Madigan still has the ability to throw his political weight around. 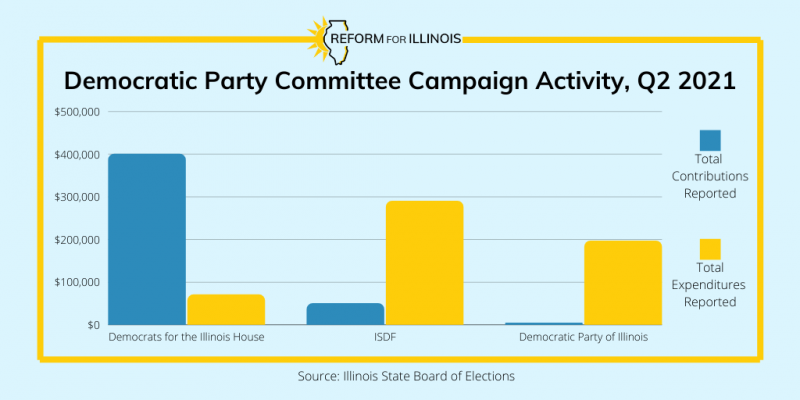 Party committees for both Democrats and Republicans were in a state of flux this quarter. Earlier this year, Congresswoman Robin Kelly became Chair of the Illinois Democratic Party, and as part of the transition, former Chair Mike Madigan relinquished control of the Democratic Party of Illinois campaign committee. However, uncertainty soon followed about whether Kelly, as a sitting member of Congress, could fundraise for state and local races. Yesterday, the Federal Elections Commission ruled that Democrats must form a special fundraising committee and not allow Kelly to take part in its administration or activities.

It was also a low fundraising quarter for ISDF, the Democratic Senate caucus committee, which took in just over $50,000 but had nearly $290,000 in expenses (primarily upkeep costs like employee salaries). Thanks to ISDF’s deep reserves, though, it ends the quarter with more than $825,000 in the bank. Democrats for the Illinois House, the newly minted House caucus committee established earlier this year by Chris Welch, raised nearly $390,000.

Democratic Primary for Secretary of State 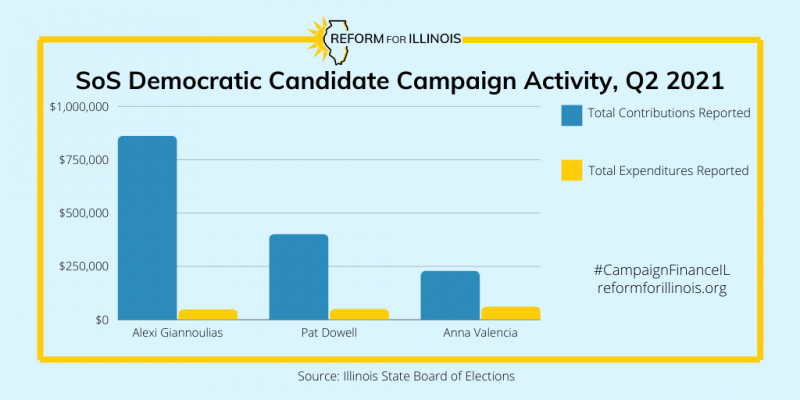 The state of the Democratic primary to replace Secretary of State Jesse White hasn’t changed much since we last checked in on it a few weeks ago. Former Treasurer Alexi Giannoulias has kept his strong fundraising lead, taking in nearly $860,000. However, Chicago Alderperson Pat Dowell and City Clerk of Chicago Anna Valencia are building up serious war chests of their own. All three candidates are seemingly preparing for the long haul, racking up contributions while making relatively few expenses.

One other note: Although she raised the least money overall this quarter, Anna Valencia won the race for small dollar donations, taking in more than $12,000 in contributions of $150 or less. 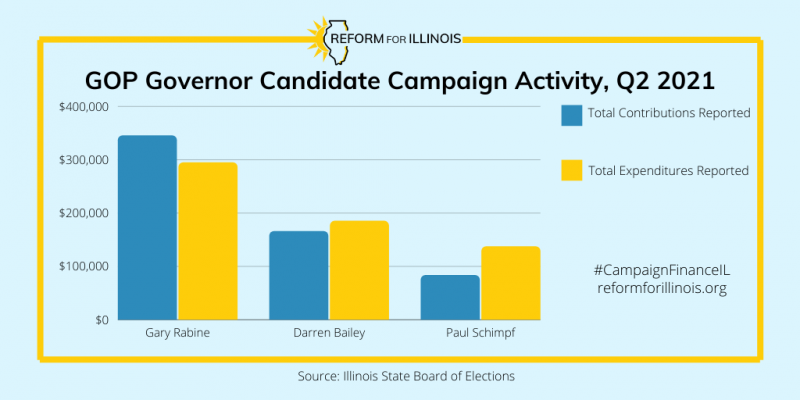 No Republican candidate for governor has taken a runaway lead in the fundraising race so far. Businessman Gary Rabine loaned his campaign just over $250,000 last quarter, but he is now also leading in full donations as well. That being said, Senator Darren Bailey and former Senator Paul Schimpf are not terribly far behind him. Both of them have shown surprising strength with small donors; Bailey has raised more than $64,000 from donations of $150 or less, and Schimpf has taken in nearly $28,000.

All three candidates are spending aggressively, with Bailey and Schimpf reporting more in expenditures than they took in this quarter. Digging into their disclosure forms shows that they’re spending large sums on fundraising, presumably to attract large donations that can power them through to the primary and beyond.

Speaking of spending more than you’re raising, Governor JB Pritzker reported $0 in contributions this quarter but spent more than $2 million. Thanks to the massive $35 million contribution Pritzker gave his campaign earlier this year, though, he is still by far the best-funded candidate for any office in the state at the moment.