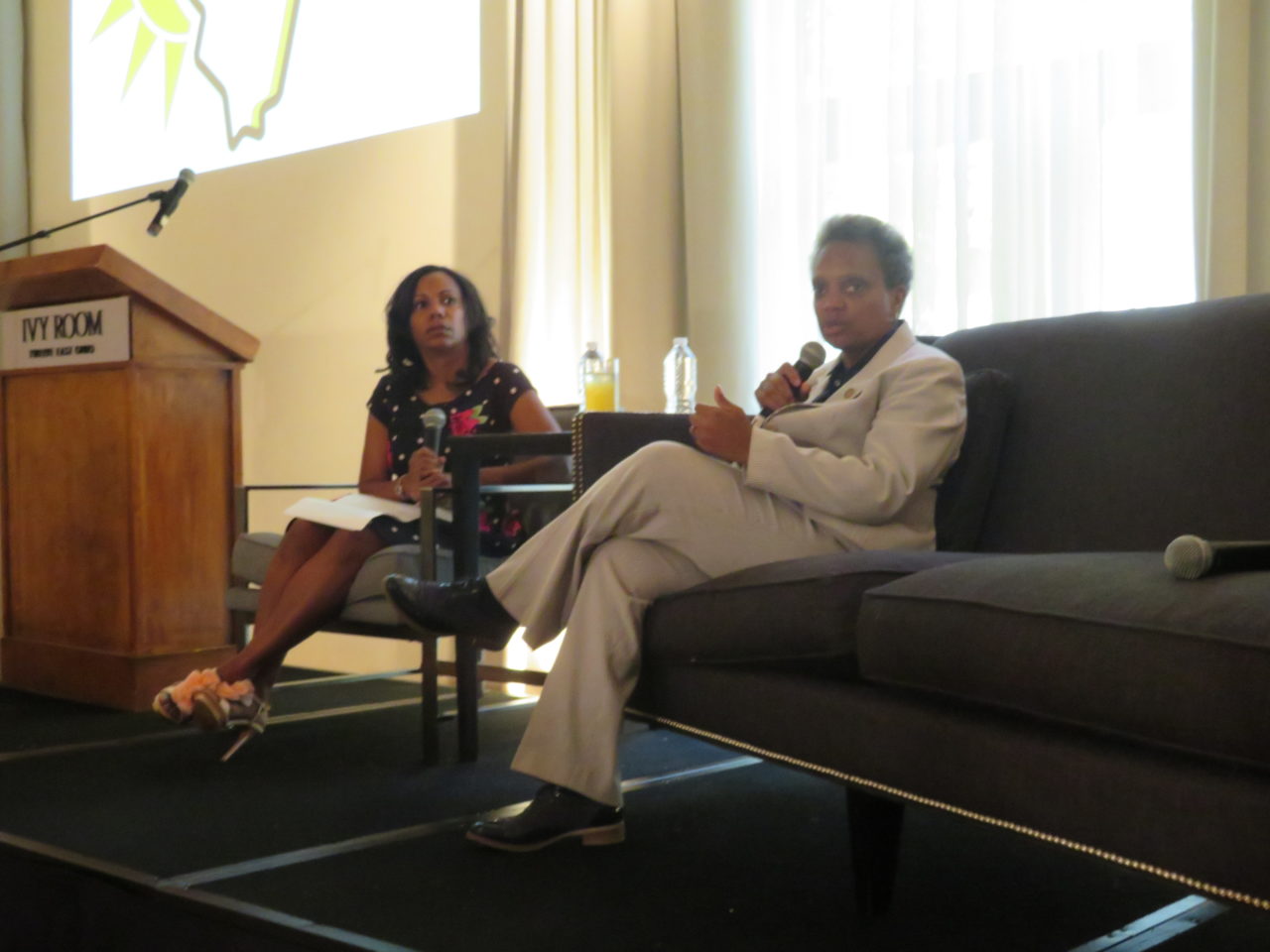 Ethics and equity are “inextricably intertwined,” Chicago Mayor Lori Lightfoot told a packed room at Reform for Illinois’ annual luncheon last Friday. “The issues can’t be separated from each other.”

The newly elected mayor joined moderator Natalie Moore from WBEZ and State Senators Melinda Bush and Robert Peters for a two part conversation about how to fix a government that doesn’t always serve the people it’s supposed to serve.

“If you’re not in that small crowded room, you’re on the outside,” Lightfoot said. “You hear from small businesses. From community groups trying to get access to government. Having to hire lobbyists to get access to things that should be on the table…There are too many generations of people who were locked out of accessing basic civic services without going through the infrastructure built up by the [Chicago political] machine.”

Not everyone is a fan of Lightfoot’s confrontational approach to Chicago’s political culture, she acknowledged. One city council member visited her office to say the mayor had been “too harsh” with Alderman Ed Burke, minutes before Burke’s federal indictment on extortion and other corruption-related offenses was announced.

Lightfoot brushed off concerns that her approach might alienate some council members, saying she had a mandate from voters to make real changes. “I don’t need 49 votes out of 50 for everything,” she said. “Do I want to make sure that we get things passed—absolutely. Am I willing to work hard to do it—yes. But am I willing to compromise my integrity, my values…to accommodate a form of status quo that absolutely, fundamentally, has failed people—no.”

The conversation then turned to state politics, with Senator Melinda Bush crediting the #MeToo movement with significant changes in Springfield since she took office in 2013. When she first arrived, the culture “made me wonder if I belonged here. I’ll tell you now that hell yes I do,” she quipped to applause from the audience.

Senator Bush noted that “Women carried every big piece of [legislation] this year. I think that’s really important. Women had not been in that position,” before #MeToo rose to prominence just a few short years ago. Still, the senator said there was much more to be done, and that she viewed her work addressing ethical issues, like how sexual harassment complaints are handled in the legislature, as an important piece of empowering women to be equal participants in Illinois government.

Senator Peters, who joined the legislature earlier this year, described his experiences in the Senate as a younger person of color, and discussed the need for more representatives with challenging life experiences to be able to get involved in politics. To him, an ethical and equitable government should “have more people who feel a sense that a lot has been put on their shoulders and they have to carry this sort of burden and they find that to be wrong; that it should be a shared burden. I think there needs to be more folks that are attached to that as a long-term vision.”

Peters told a story about a woman who came to his office because she was sleeping in Maggie Daley Park, struggling to recover from a domestic violence situation and find a safe home for herself and her children. The kind of change he wanted to see in Illinois, he said, was for people like her “to be lifted up to be in office to represent what we need in our world right now.”

All three speakers talked about how the role of money in politics today was an obstacle to an ethical government that works for everyone. Mayor Lightfoot called the cost of running a campaign an “absurdity” that was a “barrier to entry” for good people to serve and forced candidates to focus too much on wealthy donors instead of ordinary people.  Senator Peters said that with a new governor and mayor in Chicago, he was hopeful for reforms like public campaign financing that could bring more women, people of color, and people from different backgrounds into politics. “We really have a unique opportunity to bring people who look like me and look like Melinda [Bush] into the political field and positions of power,” he said. We have an opportunity “to change what government looks like.”

Reform for Illinois is a research and advocacy organization that empowers the public to participate in government, addresses the role of money in politics, and promotes integrity, accountability, and transparency in our political system.