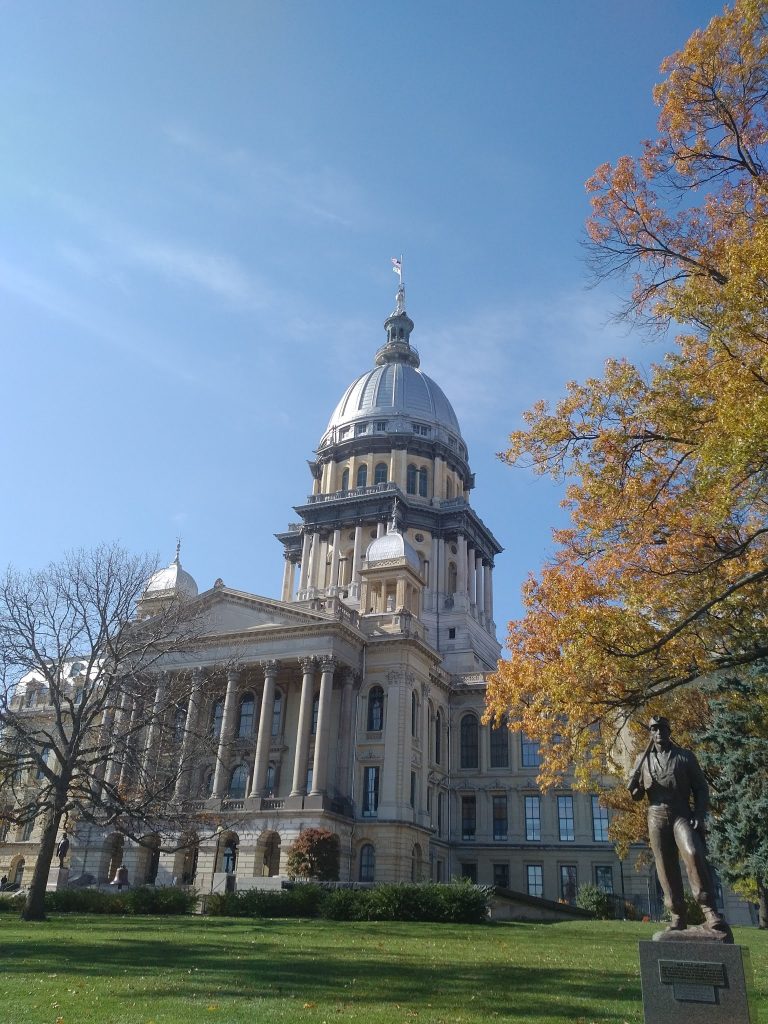 While a few local races remain uncalled and officials continue working to ensure that every vote is counted, this year’s election results have taken shape. Here are four key takeaways from this year’s contests.

Kenneth Griffin, CEO of the hedge fund Citadel and one of the richest men in Illinois, did not repeat his 2018 performance in which he gave more than $11 million to House Minority Leader Jim Durkin to support Republican candidates in the General Assembly. Instead, his major cause this year was the defeat of the graduated income tax amendment. He put nearly $54 million behind it—just shy of the $58 million Governor JB Pritzker contributed to the committee supporting the amendment’s passage. In Illinois’ marquee contest, Griffin won decisively.

But the ballot initiative wasn’t Griffin’s only victory. He may have also helped reshape the Illinois Supreme Court. Though paling in comparison to the millions he contributed to the Coalition to Stop the Proposed Tax Hike Amendment, he gave $4.5 million to Citizens for Judicial Fairness, a super PAC that spent $4.3 million to oppose the retention of Illinois Supreme Court Justice Thomas Kilbride, considered a key Madigan ally on the court. (The Madigan-chaired Democratic Party of Illinois gave his campaign $550,000.)

Once again, Griffin’s spending worked. Kilbride became the first Supreme Court justice in the state’s history to lose a retention election. The Supreme Court has voted to temporarily replace Kilbride with Appellate Court Judge Robert Carter, but in the partisan election for the seat in 2022, Republicans will have the opportunity to create a 4-3 Republican majority on the state Supreme Court.

In a different Supreme Court district, Griffin’s donation to Citizens for Judicial Fairness helped fund independent expenditures opposing Democrat Judy Cates, who lost to Republican David Overstreet. The super PAC spent $1.5 million against Cates—more than than the combined total that the two candidates raised. The seat that Overstreet will fill is currently held by a Republican, so the race will not change the court’s partisan split.

Griffin also pulled out his checkbook to support a handful of Republican candidates for the Illinois House this year, and apparently he chose his battles well. Due to independent spending by the Illinois REALTORS Fund in support of Republican candidates, contribution limits were removed in several competitive races, allowing big spenders like Griffin to contribute more than the typical $5,800. He gave $200,000 each to Thomas Morrison, Deanne Mazzochi, and Mark Batinick. All three won reelection. He also gave $5,800 to Jeff Keicher, Dan Ugaste, David Friess, Martin McLaughlin, and Grant Wehrli. Only one candidate he supported—Wehrli—lost.

Having spent more than $59 million this year, Griffin suffered only one significant defeat: his attempt to oust Cook County State’s Attorney Kim Foxx. Back in March, he donated $250,000 to Foxx’s opponent in the Democratic primary, Bill Conway. After Foxx won her primary, Griffin tried again in the general election, giving $100,000 to Republican Pat O’Brien. Once again, however, Foxx prevailed.

Democratic House candidates crushed their opponents when it came to fundraising this cycle, outraising Republican incumbents in nine races. By contrast, only a single Republican challenger (Laura Hois) outraised a Democratic incumbent (Anne Stava-Murray). In many of those races, the difference was huge. For example, Suzanne Ness, a Democrat running in the 66th House district, raised $2.5 million, while Republican incumbent Allen Skillicorn raised just $130,000.

Despite Ness’s nearly 20-to-1 fundraising advantage, her race against Skillicorn is neck-and-neck and has not yet been called. In fact, across the board, Democrats failed to translate dollars into Republican defeats. So far, only one Democrat, Janet Yang Rohr in the 41st House district, has managed to oust an incumbent—and it took her $2.5 million to do it.

The results are a stark reminder that under some conditions, money can only take a candidate so far. Other factors, such as the national political environment and the underlying partisan lean of a district, have a large impact as well. Nevertheless, the lopsided fundraising makes the results look more surprising. As political scientist Kent Redfield recently told the Southern Illinoisan, Democrats “spent an ungodly amount of money to not win seats.”

Of course, the person providing candidates with that money matters as well.

3. Madigan’s reputation may be starting to outweigh his campaign contributions.

So far, Republican House challengers have been declared winners over Democratic incumbents in three races. In the 45th district, challenger Seth Lewis leads over incumbent Diane Pappas, but the race has not yet been called. Just one Democrat has defeated a Republican incumbent so far, though as noted above, Suzanne Ness is on track to defeat Allen Skillicorn.

While House Minority Leader Jim Durkin will likely not achieve his goal of denying Speaker Madigan a supermajority by picking up a net four seats, the results challenge the notion that Democrats should continue to support Madigan because of the huge quantities of cash he controls.

As is tradition, Madigan was a major focus of attacks against Democratic House candidates. Despite his unpopularity, in years past he has managed to retain his positions as Speaker of the House and Chairman of the Democratic Party of Illinois in part through the funds he can provide candidates. But his reputation may now be more valuable to Republican candidates than the millions of dollars he can direct to Democratic ones.

Of course, Democrats are at no risk of losing control of the House anytime soon, and they may even keep their supermajority. But it is noteworthy that Speaker Madigan has been able to produce so few wins for both incumbents and challengers in the races where he is sending the most money.

With only 22 seats up for election, both the risks and rewards were smaller for Democrats in the Senate than in the House. At a minimum, Democrats will hold their 40 seats and may manage to pick one up.

The only Democrat to face a serious financial threat was Dave Koehler in the 46th district. Koehler’s Republican opponent, Mary Burress, raised $1.4 million, with more than $1 million coming from the RSSCC, the campaign arm of the Republican Senate caucus. But Koehler matched that with $1 million in contributions from the Illinois Democratic Heartland Committee along with other donations, raising $2.4 million overall. Koehler has successfully held on to his seat. Raising a combined $3.9 million, they made the 46th Senate district the most expensive competitive contest for a General Assembly seat this cycle.

The other cash-flooded race was in the 25th district to replace Republican Jim Oberweis, who ran for Congress. The race between Democrat Karina Villa and Republican Jeanette Ward has not yet been called, but Ward has conceded. Villa will likely flip the seat thanks in part to the $2.1 million she raised against Ward’s $661,000. Senate President Don Harmon’s caucus committee, ISDF, bankrolled Villa’s campaign, contributing more than $1.2 million.

However, even if Villa takes the seat, her win could be offset if Democrat Robert Martwick loses to Republican challenger Anthony Beckman in the 10th district. The race remains uncalled, but Beckman is doing better than anticipated, given that he raised just a little over $55,000. The tight race may come as a surprise to the parties as well, given that neither spent heavily on the contest. ISDF gave Martwick just $9,500 and the Republican Party committee gave Beckman less than $20,000.

This was the first general election with Harmon as Senate President, and while the results in the House and in statewide contests have led to new calls for Madigan to resign, it appears that Harmon has produced results for his caucus. His recently-established caucus committee, ISDF, transferred $2.4 million to candidates. With the exception of Karina Villa, ISDF gave exclusively to incumbents and candidates running in seats already held by Democrats. If Harmon can establish himself as a fundraising force without Madigan’s baggage, he could be in a strong position to exert control over the future of the state party.

Transfers from ISDF to Senate Candidates This Cycle

In some ways, 2020 may have been a dress rehearsal for what may be a much wider election in 2022, when all 59 Senate seats will be up for election following redistricting. That map may present more opportunities for Democratic pickups but will also have more incumbents in need of defending. We can expect Harmon to fundraise much more aggressively for his caucus next time around.

Where will we go from here?

Between the graduated income tax amendment, Supreme Court seats, and General Assembly races, four men—Kenneth Griffin, JB Pritzker, Mike Madigan, and, to a much lesser extent, Don Harmon—directed the flow of more than $134 million this cycle on state races alone.

So while the role of big money in this election cycle was complicated—Griffin’s millions appear to have been more effective than Pritzker’s or Madigan’s this time around, for example—one thing is clear. Political power in Illinois is far too concentrated in the hands of just a few men. And without reform, there is no sign that will change anytime soon.