On July 17, the Justice Department announced its deferred prosecution agreement with ComEd, implicating Speaker Madigan as the recipient of ComEd’s bribes. Being at the center of a scandal, however, has not led to any noticeable change in Speaker Madigan’s fundraising success.

The chart below compares the contributions received by the four Madigan-chaired committees from July 21 (a few days after the release of the deferred prosecution agreement) through August 31. This year, the committees have raised more than they did over the same period in 2018. 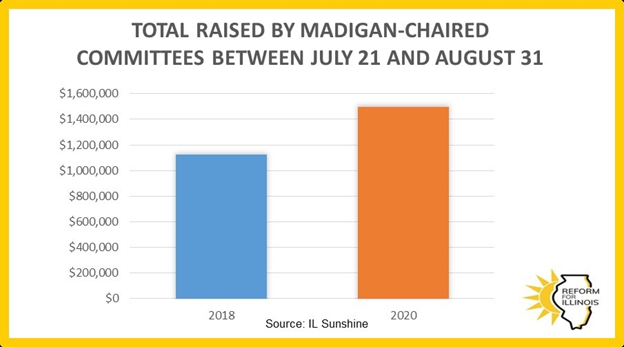 Much of the money has come from Speaker Madigan’s most loyal and generous donors, such as the LiUNA Chicago Laborers District Council, which gave $362,500 in August alone to Madigan’s personal campaign committee. Clearly, the scandal that has embroiled Speaker Madigan has not scared off his biggest donors.

Madigan’s fundraising has increased dramatically since 2014

Madigan’s fundraising has exploded since 2014, when multimillionaire Bruce Rauner entered the political scene and the Speaker claimed he needed to fight fire with fire by tapping big donors and exploiting the self-funding loophole, which lifts contribution caps when a candidate spends a certain amount on their own campaign. But with the apparent departure of Rauner from the political and funding arena, Madigan’s fundraising pace has continued to accelerate. The presence of billionaire Ken Griffin, who has been mostly restrained in his political contributions so far this cycle (with one $20 million exception), may provide one motivation for stockpiling funds. Regardless of the cause, Madigan’s ballooning fundraising looks like it is becoming the new normal. And the concentration of all that money in his hands has troubling implications. 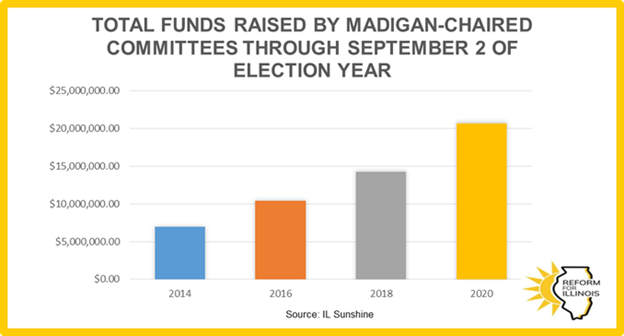 Madigan’s money can buy him influence and protection

Speaker Madigan has put his increased contributions this year to work. Even with the Speaker embroiled in a scandal, Democrats are on the offensive on the campaign trail, aiming to build on their 2018 wins to pick up additional seats. In a year when Democrats already control 74 out of 118 House seats, Democratic challengers are outraising Republican incumbents in eight races. Much of that money has come to the challengers through Democratic Majority or another Madigan-controlled committee.

For example, Michelle Darbro, who is running against Republican incumbent Brad Stephens in the 20th House district, has outraised her opponent by more than $400,000 so far. She has received more than $200,000 in total from the Madigan-controlled Democratic Majority and the Democratic Party of Illinois. In addition to this direct support from Speaker Madigan, she’s received significant contributions from committees where the Speaker carries influence, such as $109,800 from the campaign committee for House Majority Leader Greg Harris and the LiUNA Chicago Laborers District Council PAC, one of Madigan’s biggest donors. If Darbro wins her race against Stephens in September, it will be due in no small part to money that came directly from Speaker Madigan or that he was able to direct her way.

Darbro is far from the only candidate with this fundraising dynamic. Suzanne Ness, another Democratic challenger, has received over $200,000 from Madigan-chaired committees. When challengers win, their financial relationship with the committees generally remains strong. Diane Pappas, who defeated a Republican incumbent in 2018 and is now running for reelection, has received more than $193,000 from Madigan-chaired committees since the last election.

*Indicates a candidate running against a Republican incumbent

As Democratic legislators wrestle with whether or not to support Speaker Madigan and some call for his resignation, this degree of financial influence across the party is deeply concerning. Voters may reasonably wonder if Democratic lawmakers’ support of Speaker Madigan has more to do with their fear of losing his committees’ financial support than their genuine belief in his innocence. Even if the donations have no inappropriate impact on legislators’ thinking, the appearance of corruption created by such large donations from a single individual can undermine voters’ trust in their representatives, damaging Illinois democracy.

As Madigan’s fundraising continues to increase dramatically with each new election cycle, his financial influence over his caucus increases as well.

Does Madigan’s fundraising prowess make him too big to fail?

Even before the ComEd agreement was made public, Speaker Madigan was the most unpopular figure in Illinois state politics, with only one out of five Illinoisans approving of his performance. Yet numerous scandals later, he has held onto his positions as Speaker of the House and Chair of the Illinois Democratic Party—a pairing held by no other politician in the country—and is holding on even now.

In a sane system this would be a puzzle. In Illinois, where Madigan’s money machine has dominated the political landscape for decades, it’s business as usual.