Where their interests lie: Influential sectors in Chicago take sides in mayoral race 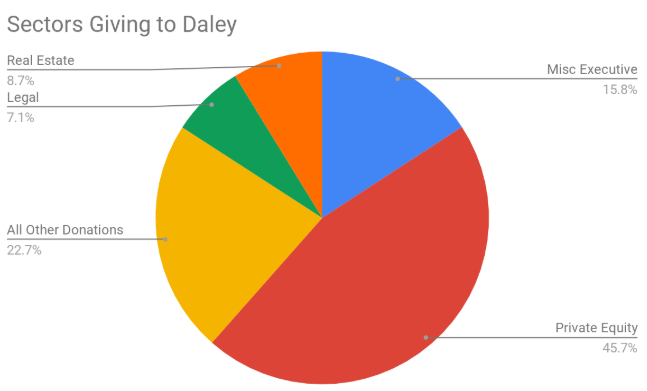 With votes set to be tallied Tuesday night in Chicago’s heated mayoral race, a close look at who’s funding the campaigns shows the city’s various – and sometimes competing – sectors have a lot riding on certain candidates.

In all, nearly $30 million has been pumped into 14 mayoral campaigns. You can see where each candidate’s cash is coming from in detail at Reform for Illinois’ interactive Illinois Sunshine website.

RFI has previously revealed that ordinary voters have played virtually no role in mayoral fundraising and that some candidates have poured millions into their own campaigns.

Now we break down how five major sectors are fueling the campaigns of the five candidates who raised the most money from outside sources: Bill Daley, Toni Preckwinkle, Susana Mendoza, Lori Lightfoot and Gery Chico. We analyzed contributions from the finance, organized labor, real estate and legal sectors as well as contributions from corporate executives who do not fit into one of those categories. The analysis covers donations through Feb. 6, notably excluding hedge fund billionaire Ken Griffin’s recent $2 million contribution to Daley, which only increased the candidate’s previous money advantage and hiked the finance sector’s influence in the race.

Before Griffin’s donation, the finance sector and organized labor were matching each other nearly dollar for dollar across the five candidates, making up a combined 42 percent of all contributions. Real estate and legal sector donations made up 8-10 percent each, while corporate executives who didn’t fit into one of those categories contributed 14 percent. The finance sector doesn’t appear to have much disagreement within its ranks about who to support. Daley took the lion’s share of finance sector funds. By dollar count, organized labor threw most of its weight behind Preckwinkle, though most of her funds came from service unions while trade groups have largely backed Mendoza.

Even before Griffin’s $2 million contribution, nearly half of Daley’s funds came from finance firms and their executives. Other significant donors include real estate and legal interests as well as corporate executives from industries that don’t fit into those major sectors. While the finance industry dominates Daley’s war chest, service unions are the backbone of Preckwinkle’s campaign. The largest share of union funds come from branches of the expansive Service Employees International Union (S.E.I.U.), which contributed $2.17 million or 87 percent of her union total. She has also received support from the American Federation of Teachers, the Chicago Teachers Union, and others. After Preckwinkle, Susana Mendoza has benefited the most from organized labor, particularly trade unions. The Laborers’ International Union of North America and Chicago Regional Council of Carpenters made up 88 percent of her fundraising from unions ($600,00.00). Overall, contributions from organized labor have amounted to nearly a third of her total, while about one out of every six of her dollars came from corporate executives who didn’t fit into one of our other major sectors. Lori Lightfoot’s background as a partner at biglaw firm Mayer Brown may have given her an advantage in collecting contributions from the legal sector – they make up more than a quarter of her total. Dollar for dollar, however, Daley still garnered more from law firms and lawyers than Lightfoot. Chico took in the biggest percentage from real estate

Real estate comprised a quarter of Chico’s pie, with significant slices from finance, legal, and other corporate executives adding up to 60 percent of his total. Ken Griffin’s bombshell $2 million contribution almost doubled Daley’s already hefty donations from the finance sector and nearly matched labor’s previous totals. On the eve of the election, it makes up 1/15 of the total raised among all 14 candidates. What effect this will have on the race – and on the broader conversation about big money in Chicago politics – remains to be seen.

Legal donors are attorneys (either self-employed or with a firm), law firms  or, in some instances, other law firm staff.

Union donations include all funding from unions and union PACs.

All other donations include those from unaffiliated individuals, political committees, and personal funds.