Six Months Till the Primary: Fundraising Heats Up in the Last Quarter of 2021

Last weekend started with a bang, with Governor JB Pritzker putting a jaw-dropping $90 million of his own money into his reelection campaign account on Friday night. The news was followed by Aurora mayor Richard Irvin announcing his candidacy for the Republican nomination for governor. Irvin is backed by multibillionaire Ken Griffin, who has reportedly pledged up to $300 million to ensure Pritzker doesn’t get reelected.

But those weren’t the only big money stories this week. Quarterly campaign finance reports were due on Tuesday for the last three months of 2021. We took a look at some key races and committees as the primary season heats up. 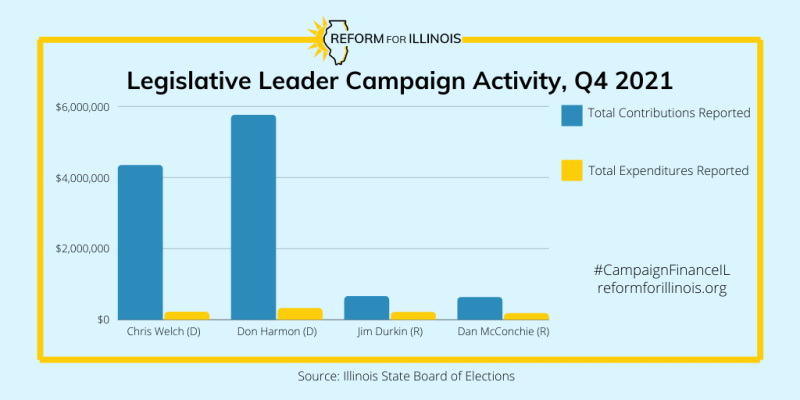 House Speaker Chris Welch, Senate President Don Harmon, and Senate Minority Leader Dan McConchie have each taken advantage of the self-funding loophole, which allows their campaigns to take in unlimited contributions if they give or loan their campaign accounts $100,001. All the legislative leaders loaned their triggering amounts rather than donating them, and Speaker Welch and Leader McConchie have already repaid themselves in full. Senate President Harmon was the first legislative leader to reach the self-funding threshold in February, but he hasn’t paid himself back (yet). Harmon, who also took advantage of the loophole in 2020, paid himself back on February 23, 2021 –– two days before he loaned his campaign another $100,001 to eliminate contribution caps for his 2022 race. That was the second time he’s done that: the previous year he also repaid himself two days before loaning the money to his account again.

The self-funding shenanigans highlight the now commonplace exploitation of the loophole, also known as the “millionaire’s exemption.” Originally intended to level the playing field between non-wealthy candidates and deep-pocketed self-funders (for whom spending limits are unconstitutional), the provision is now routinely used to allow huge amounts of money to flow into legislative leaders’ accounts and back out to party loyalists and allies. The fact that a loan will trigger the provision means officials can circumvent contribution limits at no permanent cost to themselves, enabling them to consolidate their own power while magnifying the influence of megadonors and special interests.

<<Read our deep dive into the exploitation of the self-funding loophole and our recommendations for how to fix it. >>

Harmon and Welch outraised their Republican counterparts by a whopping 9:1 and 6:1 ratio, respectively.

Leader Durkin, the only legislative leader who hasn’t taken advantage of the self-funding loophole, brought in $650K last quarter. Durkin begins 2022 with just over $1 million cash on hand. Leader McConchie reported receiving $623K in the last quarter, and begins the year with $1.5 million in his account. McConchie’s largest contributions are $150K from Chicago Land Operators Joint Labor Management PAC and $50K from Health Care Council of Illinois PAC.

And don’t forget about Mike Madigan: his campaign account still has $10.5 million almost a year after he resigned from the Illinois House.

Noticeably absent from the legislative funding story is any significant contribution from Ken Griffin. Aside from a paltry (for him) $12K contribution to the Illinois Republican Party on New Year’s Eve, he appears to have held his fire on the legislative front thus far. While historically his big contributions to legislative leaders have come in September or October of the year before the election, there’s still plenty of time for him to enter the fray. 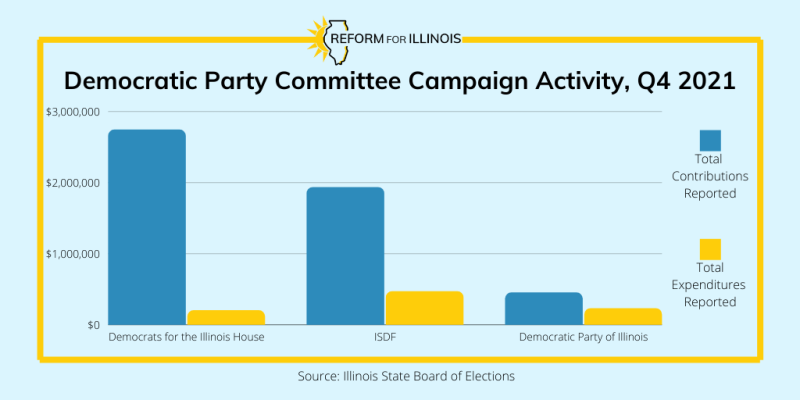 Speaker Welch’s Democrats for the Illinois House committee, created last March, just had its best quarter on record. It raised over $2.7 million, thanks in large part to a $2 million contribution from JB for Governor. Other large contributions came from union PACs and corporate donors.

ISDF, the Democratic Senate caucus committee controlled by Don Harmon, had a similarly strong quarter, reporting over $1.9 million in contributions and about $2.7 million cash on hand at the start of 2022. A $1 million donation from JB Pritzker’s campaign accounted for more than half of ISDF’s haul. Union and corporate PACs account for the remainder of ISDF’s largest contributions.

The Democratic Party of Illinois had a much stronger showing last quarter, with over $449K in contributions and $2.6 million in cash on hand. This comes after DPI seemed to struggle to get started with new leadership in the second and third quarters last year, raising only $65K in the third quarter. Union PACs made up DPI’s largest contributions last quarter, with Sheet Metal Workers Union Local 265 PAC Fund, SEIU Illinois Council PAC, and the Illinois Federation of Teachers COPE each transferring the $59.9K maximum contribution. 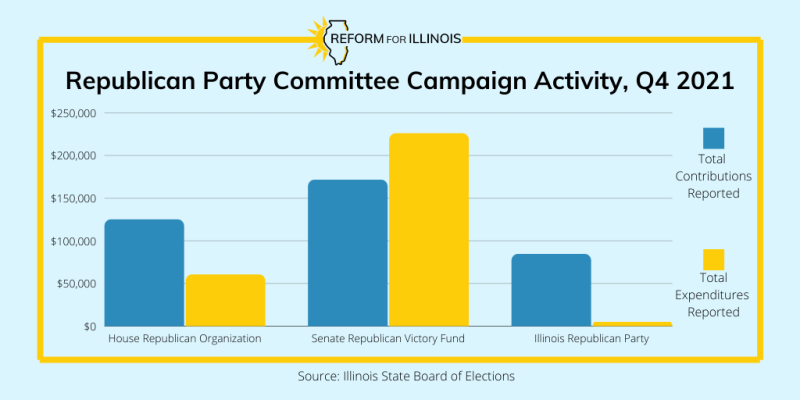 The House Republican Organization and the Senate Republican Victory Fund pulled in $124K and $171K respectively last quarter, a decent haul for those committees but a far cry from Democratic fundraising levels. The Senate Republican Victory Fund reported over $225K for expenses like employee salaries and events. Over $61K went to SurusDH LLC, which is billed as a campaign tech, data, and managed services company for Republican candidates. The Illinois Republican Party had a relatively quiet quarter and raised about $84K, with $318K cash on hand.

Democratic Primary for Secretary of State 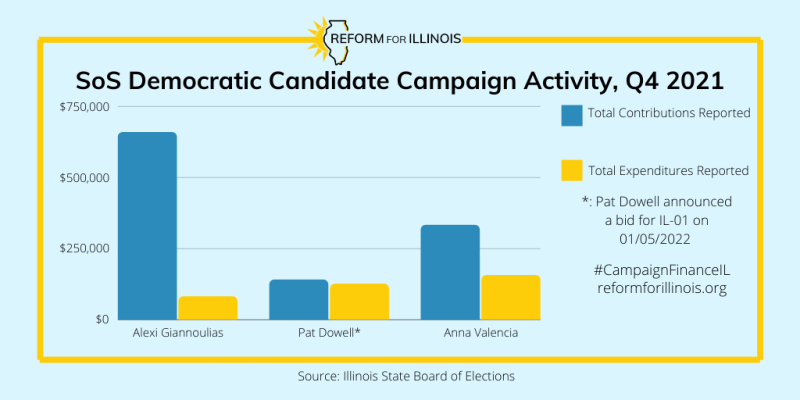 The Democratic primary for Secretary of State is heating up, and only two candidates remain. Pat Dowell announced her candidacy for Congress’s IL-01 on January 5th, leaving Alexi Giannoulias and Anna Valencia as the only two candidates left in the race. Dowell raised $139K in the last quarter of 2021, leaving her with $477K in her campaign coffers at the start of her new congressional campaign.

Alexi Giannoulias had another strong fundraising quarter and reported over $658K in contributions. His campaign begins 2022 with over $4 million in the bank, which is an impressive amount for this point in the campaign. A helpful comparison from POLITICO Illinois Playbook: Attorney General Kwame Raoul had raised about $1.1 million at the same point in his contested primary for another open seat.

Anna Valencia took in $331K last quarter, and her campaign starts the year with $882K cash on hand. Neither candidate is particularly strong in small-dollar donations, though Valencia has a slight edge: she raised over $15K in donations of $150 or less last quarter, accounting for 4.6% of her total contributions. For comparison, Giannoulias received $6K in donations of $150 or less, or 0.98% of his total contributions. 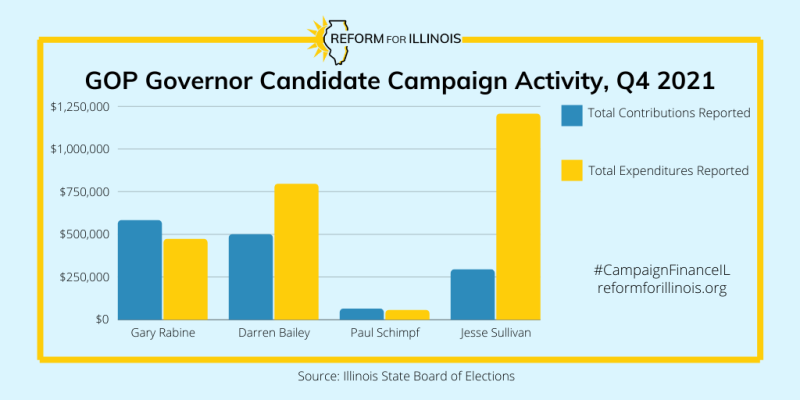 The fight for the Republican nomination for governor is heating up now that Aurora mayor Richard Irvin announced his bid on Monday.

Gary Rabine and Darren Bailey raised the most money last quarter, although Jesse Sullivan still has a runaway lead in cash on hand with over $9.1 million in the bank. Bailey has $707K, Rabine has $548K, and Paul Schimpf has $80K in cash on hand.

Each campaign, though, spent almost as much or more than they raised last quarter, and no candidate has come close to matching Governor Pritzker’s reelection war chest. Rabine reported $580K in contributions and spent $470K, Darren Bailey reported raising $499K and spending $794K, Schimpf raised $61K and spent $54K, and Sullivan reported $293K in contributions and $1.2 million in expenditures last quarter. Meanwhile, the Chicago Tribune noted that Pritzker “spent more in the last three months — more than $9.9 million — than the GOP candidate with the most cash had on hand.”

The game is about to change completely, however, now that Ken Griffin has decided to support Mayor Irvin, and we can expect Governor Pritzker’s financial advantage to shrink dramatically.

Two out of Sullivan’s three largest contributions last quarter are from Californians: $100K from Bradley Garlinghouse, $50K from Robert Oster, and another $50K from William O’Kane, an Illinoisan. Sullivan started his campaign with millions from Californian donors, including $5 million from Chris Larsen, the cryptocurrency mogul reportedly worth $6 billion.

Governor Pritzker raised just $6.7K in non-personal funds last quarter, though his $90 million donation last Friday means that he begins 2022 with $104.7 million in campaign funds at his disposal. So far he has contributed $132 million of his own money to his reelection campaign. He spent a record-breaking $171 million of his personal wealth on his 2018 campaign for the governorship.

We’ll continue keeping an eye on the big money in Illinois races, but it’s always good to do your own research, too. Check out our easy-to-use database, Reform for Illinois’ Sunshine Campaign Finance Tracker, to see who’s funding (and influencing) your elected officials.